Would you go on a trip without knowing the destination? 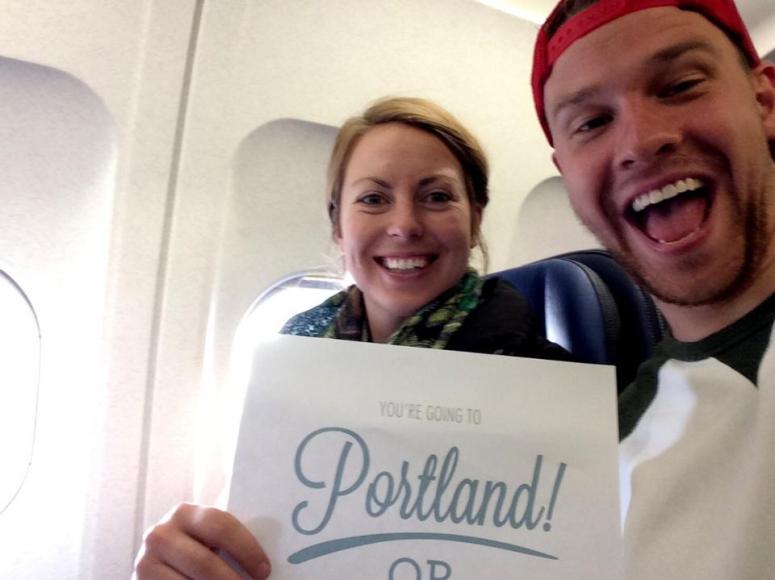 Two travelers excited about their surprise trip to Portland!

Pack Up + Go is the brainchild of Lillian Rafson, who started the company when she was just 23. Yes, you read that right — she was just 23-years-old.

Tierney Kain and her best friend Lindsay Newlen are coworkers, travel buddies and neighbors in Washington, D.C.. They’ve been everywhere. Only thing is, when they are planning vacations in the U.S., they have a tough time deciding where to go.

“Europe is easier; it’s hard to be disappointed,” says Kain, who said they were stumped over where to go for a Memorial day trip.

This lead them to discover Pack Up + Go,  a start-up travel agency with a twist: It specializes in surprise vacations. Travelers don’t know where they’re going until they arrive at the airport!

Kain decided to try out Pack Up + Go after she read about it on a blog. “It felt like the perfect solution — letting someone plan a trip for us, rather than agonizing over Yelp reviews and Travelocity deals.”

Another friend decided to join them, and after they filled out a questionnaire and chose a budget, Pack Up + Go selected a destination for the trio. Envelope please…Chicago!

“To be honest, I was initially disappointed. I’d always thought of Chicago as a ‘New York City Lite’ kind of place,” recalled Kain. “I didn’t actually get excited until I saw our hotel, the Allegro, which looked like it’d stepped out of my home decor dreams. Then I spent some time reading through the itinerary, and I got more excited. We ate so well and were able to pack in all the highlights in a short weekend.” 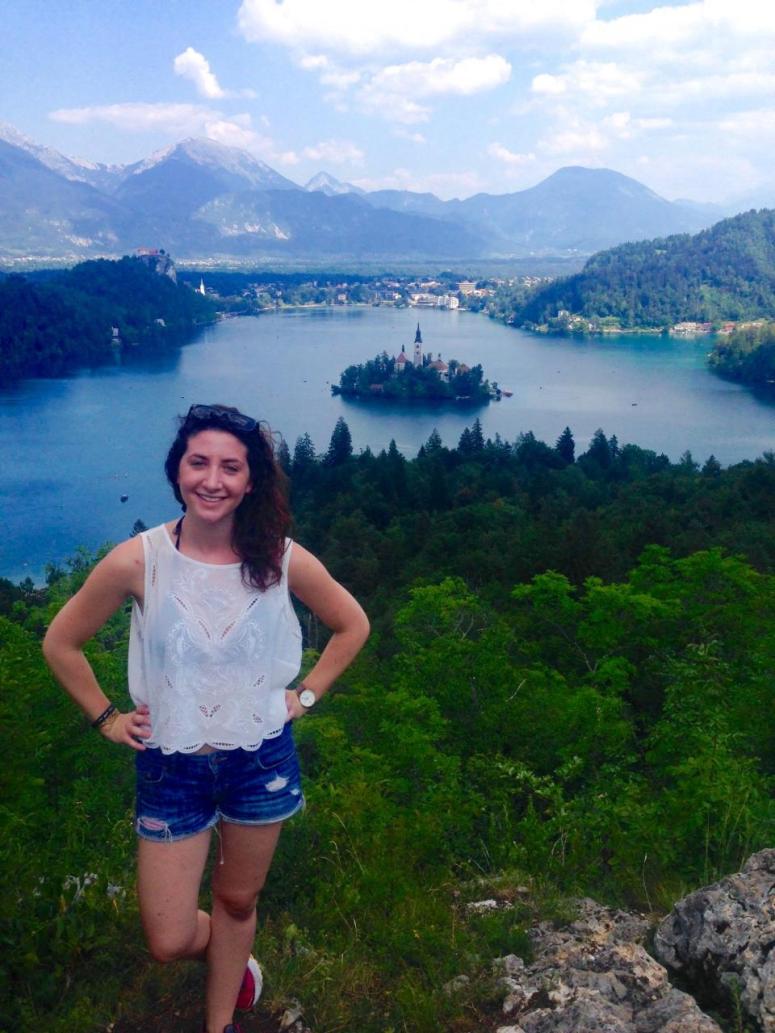 CEO Lillian Rafson came up with the idea for Pack Up + Go only a year ago (January 2016). After graduating college, she was working for an office-supply company in NY, and quickly discovered working a desk job was not for her.  “I loved the people and the company atmosphere, but I was restless,” she says. “I knew I would rather be traveling.”

Lillian quit her job and headed off to travel Europe. “I found myself working my way up the Baltic Coast and Eastern Europe, and I first was introduced to the idea of a surprise travel agency there.”

She thought the idea would be a hit back home,  and she even had altruistic reasons for starting the company. “I thought it would do really well to encourage Americans to travel and was even thinking about the economic benefits and how much money could go to small businesses and restaurants and shops through tourism,” she says. “A lot of American cities are being robbed of that because we’re so quick to travel overseas.”

Lillian’s initial projection was that Pack Up + Go would be planning 50 to 100 trips a year. But just as she expected, it was a hit and totally took off – and six months in, the company had booked 250 trips! Crushing their projections. 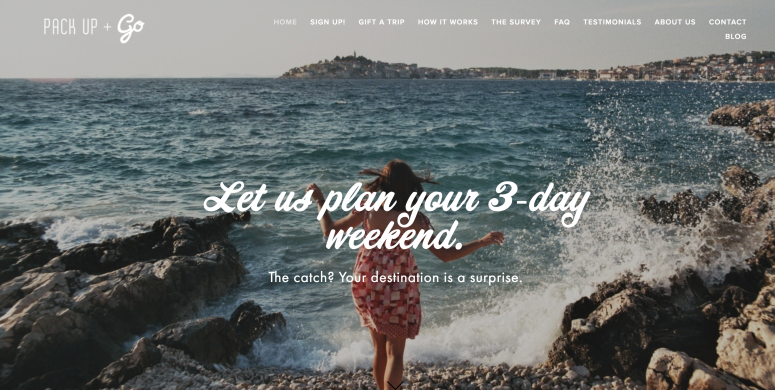 Here’s how it works:

There’s a range of budgets. Customers have their choice of doing a road trip (starting at $450 per person) or booking a vacation that includes air (from $650).

Then you fill out a quick survey and check off a list of things you like: outdoor activities, shopping, fitness, parks, live music, cafes and bakeries, family activities, comedy, etc. They also have an option for dietary restrictions (so vegans like me can get all the best suggestions before traveling- what a win!). Pack Up + Go selects a destination, books all your travel, and builds out a list of recommendations and can suggest day-by-day itineraries!

Travelers get a packet of information in the mail, telling them what time to go to the airport and a little information to help with packing. A sealed envelope reveals the destination.

Most people wait until they get to the airport to open it and find out where they’re going.

That’s when the fun begins!

To keep the surprise element, Pack Up + Go avoids somewhat obvious choices like NYC, Los Angeles, and Las Vegas, figuring those are places where people would plan trips themselves. “We do send some customers to bigger cities like Chicago or Miami, but my favorite trips are to midsize or small cities: Portland, Maine, or Burlington, Vermont,” Lillian explains. “Every city has a lot to offer. We’re giving cities that people aren’t necessarily seeking out organically a chance to shine.” 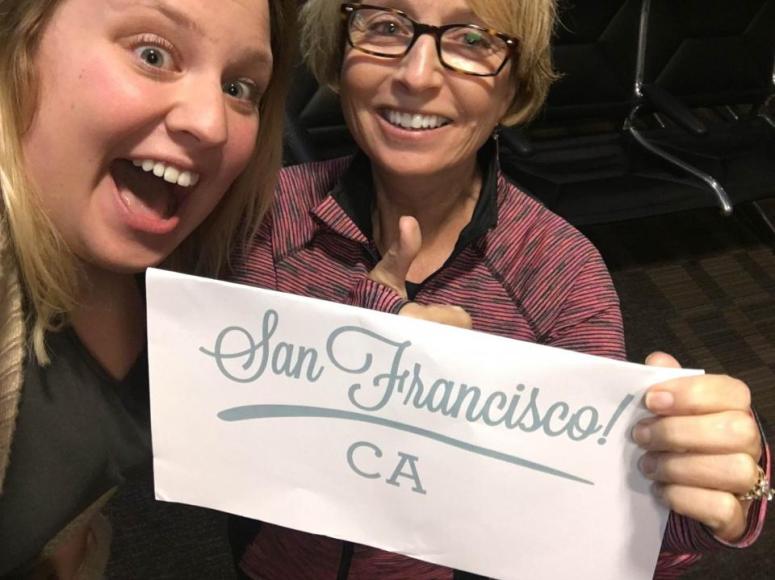 Pack Up + Go caters to a range of ages and demographics: family trips, girls getaways, you name it. “We’ve had two women who have been best friends for 45 years go on a trip together, we’ve had recent retirees, lots of 20-somethings, also mother-daughter trips.”

One of the highlights was when a couple from New Jersey used their trip to Miami to get engaged. “I didn’t know this was going to happen, I had no idea he was planning on it,” says Lillian.

Rafson says she comes from an entrepreneurial background — both of her parents are small business owners — and took some business and finance classes while she was an undergrad at New York University. But she has learned most everything on the fly: “I’m still learning a lot of lessons about entrepreneurship and owning a business, especially in terms of all the fringe operational things that you don’t consider when you think, ‘Oh, I’m going to start a travel company.'”

Lillian feels that technology has made starting a business easy with low cost resources like squarespace (web design), MailChimp (email lists and surveys), and QuickBooks (accounting).”It makes a person like myself who doesn’t necessarily have a background in coding and web development or accounting or marketing able to do each of those things a little better,” she says.

As a woman, she has discovered an incredible amount of support. “I’ve found that there are a lot of events catered specifically toward women starting businesses to be able to meet each other and bounce ideas off of. I’ve found it a gateway to opportunity, though that might also be industry specific — travel versus finance or real estate.”

So far, Pack Up + Go has been generating a lot of buzz, being featured in major press outlets (Business Insider, Vogue, Forbes, Thrillist, NBC and more) : the TV show Shark Tank reached out to Lillian, and another TV production company wants to create a show around the idea. But for now, she’s keeping it small and hands-on so that she can focus on helping travelers have amazing vacations. how cool?